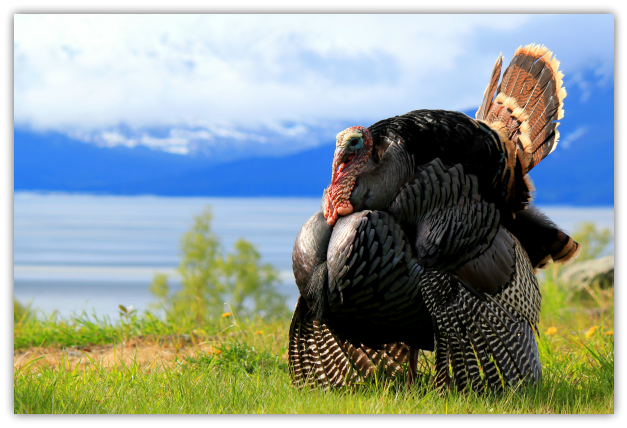 Turkeys have played a central role in the history of the United States.

In a letter to his daughter, Ben Franklin offered praise for the bird, which he called, “…a true original native of America…(though a little vain and silly tis true, but not the worse emblem for that) a bird of courage, and would not hesitate to attack a grenadier of the British guards who should presume to invade his farm yard with a red coat on.”

He was correct about turkeys’ aggressive streaks, but lately they haven’t been after the British. Nope. Turkeys have been terrorizing Americans. WBUR in Boston reports turkeys, which had disappeared from New England in the 1800s, have been successfully reintroduced to the region.

The victory isn’t being celebrated in all quarters, though. According to reports, turkeys seem to prefer suburbia where they’ve been “clashing with residents who say they destroy gardens, damage cars, chase pets, and attack people.”

The problem isn’t unique to Massachusetts.

In fact, turkey aggression has become so acute wildlife officials have offered the equivalent of a wild turkey survival guide. First, they recommend, cover windows and shiny objects (turkeys may respond aggressively to sparkly items and their own reflections). Second, Americans who are being intimidated by turkeys should not “...hesitate to scare or threaten a bold, aggressive turkey with loud noises, swatting with a broom, or water sprayed from a hose. A dog on a leash is also an effective deterrent.”

Climbing trees is not an effective way to escape the menacing fowl. Domestic turkeys cannot fly, but wild turkeys can soar at speeds of up to 55 mph for short distances, according to LiveScience.com. Next time you spot a rafter of turkeys, remember: “Turkeys in the wild are far stronger and faster than the ones that land on Thanksgiving tables."

And some people worry about zombies…